November 30-December 10, 2018: Framing is underway! The wall panels arrived from a factory up north, along with the roof trusses. A large flatbed truck off-loaded them onto a flat area I had the excavator prepare next to the curb.

My crew, brothers Pat and Jamie Rogers, immediately set to detaching the stacks from their shipping lumber. By noon, the crane arrived from Dodgeville and the first panel became airborne a half hour later. By 3 pm, all but the east wall was set and secured.

Most homes in our area are built on site, stick by stick. The promise of prefab homes has long been held out as “the future of home construction”. I’m not sure why it isn’t more commonplace. In my 32 years as a home designer I’ve only collaborated on two. But I decided it was a good bet for this house.

One reason is that my salesman at Tri-County Building Supply in Spring Green was experienced with it. Jim Barnicle became my partner in reviewing the shop drawings supplied by the factory to make sure they lined up with my blueprints. The idea is to think things through on paper instead of on-the-fly at the job site. I wanted to apply the principals of “advanced framing”—-using as few studs and headers as possible to reduce waste and structural redundancy while also providing more room for insulation. This protocol is promoted by building scientists and “green builders” like me but isn’t well known or well accepted.

Prefab homes—or in my case panelized components—are built in a climate controlled facility and are erected in days, not weeks. The wood isn’t exposed to the weather as long so it stays dryer and straighter. The factory is incentivized to minimize waste, and spares me the work of stacking, saving or dumpstering cutoffs. What’s the downside? The cost and energy to transport and erect the panels. Renting a crane is expensive. This one is $170/hour and it’s not always easy to stage a project for fast action. Sometimes, it idles.

The next day, my crew set the interior wall panels, finished the house shell and got the garage up. We called the crane off for the next day to fiddle around with details but brought it back the following day to set the roof trusses.

My plans call for a “double stud wall” and “raised heel trusses”. The exterior walls are 2×4 studs spaced 24” inches apart (instead of the usual 16”) with a matching 2×4 interior wall to create a 12” deep cavity for insulation. The roof structure is 24” deep, to accommodate up to 22” of insulation. The sheathing is 5/8” 5-ply plywood—a premium choice over the usual 1/2” OSB (oriented strand board). Thicker sheathing is stronger and less likely to bow across the wider spacing. Plywood is better than OSB at taking on and recovering from any water or vapor intrusion and is more airtight.

The idea is to go above and beyond code minimum for long-term energy-efficiency, durability and occupant safety. I specified an aggressive nailing pattern and other structural upgrades, based on the American Plywood Association’s protocol for wind-resistant construction. Their research shows that when homes are carefully constructed, they can withstand—with minimal damage—95% of tornadoes. This comprises EF-0, EF-1, and EF-2 tornadoes. We don’t exactly live in Tornado Alley, but most of us around here remember the EF-2 tornado that tore up homes and a wide swath through our beautiful Governor Dodge State Park in 2014.  Here’s a map showing the incidence of EF-2 and stronger tornadoes.

Rough framing has got to be the most glorious stage of new home construction. Plans on paper become three-dimensional forms you can finally walk through and feel. Elevations sketched with nicely proportioned windows finally become picture-perfect views. Here’s sunset from the west bedroom (with pond). 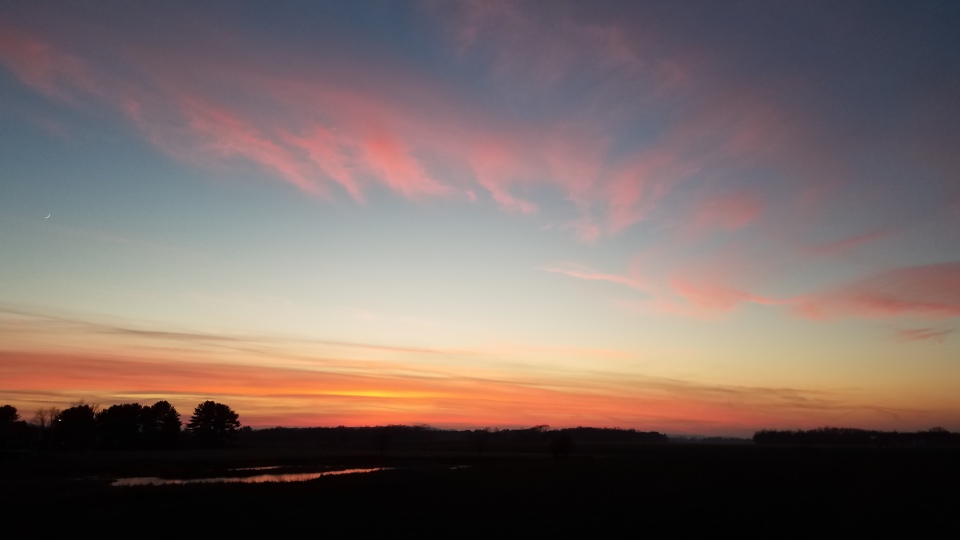 Posted on December 10, 2018 by amberwesterman