October 14 to January 7:  Now we punch holes. After all the careful air-sealing, after all the work and worry with caulk guns and rolls of tape and spray-foam—it was time to make intentional holes, lots of them.

ELECTRICAL  My electrician got started by extending the service from the panel in the garage to the far corners of the house. I got to help, drilling holes and running wire. It was all new to me, and interesting. Bob Rowen of Rowen Electric insisted on straight runs, artful bends, and minimal slack. 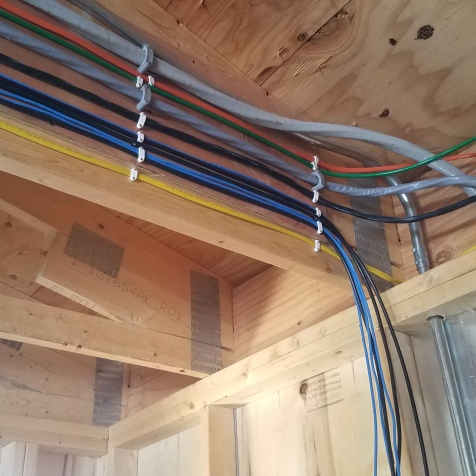 The installation required a few extra steps and probably more wire compared to a conventional home, but in several ways is more environmentally friendly. Most critical is the extra attention paid to air-sealing. Each line coming in and going out is sealed with flexible silicon caulk or flexible tape. Electrical boxes have integral gaskets that compress when drywall is attached. And the vapor retarder was taped to the gasket, providing both a continuous air-seal and vapor-seal. 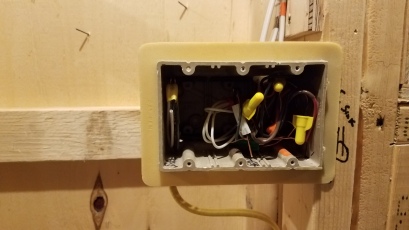 In other posts, I’ve extolled the virtues of a slab-on-grade home, but here I have to admit that it made running mechanicals harder. In a conventional home, you run freely through wall and ceiling cavities but on this job site they are “Sacred Space” reserved for insulation. You also run through the attic (none here), the basement (none here), and the floor cavities (none here). Instead, I built a chase on top of the loft floor, tucked along the back wall and out of sight from the living room below.

The electrical runs are attached to the loft flooring, covered by a plywood lid that can be flipped up for service at any time in the future. The plumbing pipes are above. Future plans call for a cushioned bench built over top and running the length.

LIGHTING  Everything is LED (light emitting diode)—-no incandescent, halogen, or CFL (compact fluorescent lights). LED’s use about 10% of the electricity of incandescents and about half that of CFL’s. LED’s don’t contain the mercury that CFL’s do—and supposedly no hazardous chemicals—but do contain small amounts of heavy metals that can be recycled. I have yet to find a recycler. Do you know one?

LED’s are not only cheap to use, they are cheap to buy. The first bulb I ever saw—just a few years ago–was proudly displayed by a friend who dropped something like $50 on it. For the garage, I chose simple porcelain sockets fitted with 25 cent LED bulbs that are expected to last 22 years, at a cost of $1.20/year. Thank goodness for those “early adopters” who purchase by purchase spur technology along—-but I’m not one of them.

Outside, I chose “dark sky friendly” light fixtures. Any fixture that casts light downward instead of upward or outward is good. To be sure, you can look for a compliance label when shopping. For everything you need to know, check out International Dark Sky Association.

A personal pet peeve and (as I learn more), harmful to human and animal health are LED bulbs that cast an eerie, unnatural brightness. It’s the same “blue light” our phone screens give off that we know disrupt our circadian rhythms. When used in outdoor lighting, they brighten the night sky more than other light sources do and effect the survival strategies of nocturnal animals.

It doesn’t have to be this way. Look for “warm white” bulbs in the 2700-3000 Kelvin range and a CRI (color rendering index) of at least 90. Notice the difference between my house and my nearest neighbor.

HEATING & COOLING  Building an all-electric, fossil-fuel free home in our northern climate would have been a laughable proposition just a few years ago, but is now possible with the latest “mini-splits”. You’ve probably seen these devices installed in a room addition, office, or small apartment. The indoor part looks like an oversized through-the-wall air conditioner, and the outdoor part looks like a rectangular version of an air-conditioning compressor. The technical name is Air Source Heat Pump (ASHP). I chose the simplest version: single-zone and ductless. 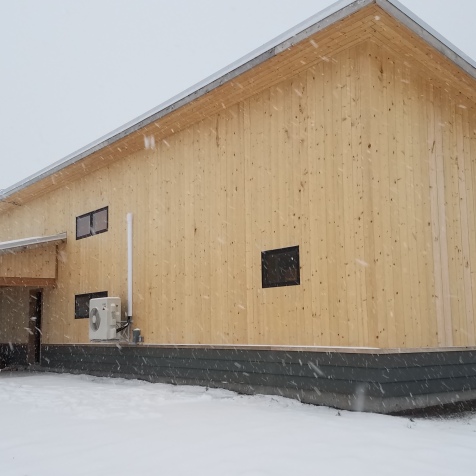 These super-efficient appliances are also super-affordable. Where a conventional house might spend upwards of $20,000 on a heating and cooling system, mine came in under $5000. Of course, this is possible because my house is wearing a thick down parka on top of a wool sweater and a turtleneck—not a sporty spring jacket.

A conventional furnace is overkill for a small, super-insulated house. Ductwork is cumbersome, expensive, often poorly sized, and can harbor dust and allergens. With an open floor plan, and for families who can tolerate some temperature differences from room to room— a single mini-split can work. Daily modifications may be needed, like closing and opening doors for better circulation and closing and opening curtains for better temperature control.

The Mitsubishi unit went in mid-October. By mid-November outdoor temperatures were dropping and snow was flying.  Reluctantly, I turned it on. The ceiling was insulated, but not the walls. We were still wiring and willing to work chilly, but the water was on and the plumbers were coming. As it turned out, 2 months would go by before wall insulation went in. I dreaded looking at my electric bill. Good news: those two months of heat were “paid for” by my solar production in July.

More good news: since I broke ground and tapped into the grid (November 2018) until now, I’ve produced more electricity that I’ve consumed. So far, my construction project is “energy net positive” by 2782 kWh. That’s a “carbon dioxide equivalent” of the carbon sequestered by 2.6 acres of forest/year OR the greenhouse gas emissions from 4881 miles of driving.

VENTILATION  People ask me, “Isn’t it true you can build a house too tight?” In a word, no. A conventional house gets its fresh air through cracks in the windows and electrical boxes and random places. That “fresh air” is pulled through dusty crevices and frame cavities and in most homes, formaldehyde-laced fiberglass batts. Along the way, it’s depositing moisture—creating a breeding ground for mold and mildew.

A super air-tight house shuts down random leaks and instead relies on a mechanical system that brings in filtered fresh air. I looked for a system that could dial up or dial down depending atmospheric conditions and how many people and plants and cooks I have over.

Condensation on window panes is the bane of Northern Homeowners and a sign of too much moisture. Stuffiness is unpleasant and a reminder that “indoor air pollution” really is a thing. Damp, stagnant air is more likely to harbor and spread disease. Effective ventilation that dries and dilutes indoor air can limit bacteria, viruses, dust mites, and mold—and prevent allergies and asthma according to the American Lung Association.

Finding the right appliance turned out to be the biggest headache on my “build a house or bust to-do list”. The answer is what’s called an HRV or ERV (heat-recovery or energy-recovery ventilator). Most HRV’s on the market are sized for larger homes or commercial spaces and require complicated ductwork and expert commissioning. They’re not yet common. Contractors I contacted seemed unfamiliar with them or unable to answer my questions. I poured over manufacturers specs and called distributors who could point to a specific unit but not installation details. I finally settled an innovative, ductless, through-the-wall product called Lunos from 475.com  My electrician gave his tacit assent.

The units look simple and unobtrusive, were easy to install, and have the best heat recovery efficiency and noise ratings I found. Working in synchrony, each Lunos (1 in each bedroom, 1 in the living room, 1 in the loft) push stale indoor air out through a ceramic core, heating it up. After 70 seconds, the fans reverse direction. Fresh air is pulled through the ceramic core—and a filter—to deliver a stream of clean, warm air to the room. I can chose from three settings: 10, 15, or 20 cfm (cubic feet per minute). This matches favorably with industry standards for a 2 bedroom home, which range from 33 to 54 cfm. When set at 20 cfm, the two pair of Lunos should be delivering 40 cfm.

The bathroom fans are an exception: to meet the high CFM ratings required by Code for year-round bathroom ventilation, we installed 80 cfm ultra-quiet Panasonic fans above each shower. They are set on a humidistat for brain-free operation.

For all these holes, none had to go through the roof—including the plumbing vent. My north sidewall is tall enough and large enough to accomodate all but two Lunos pentrations (located on the south wall).

August 24, 2021 UPDATE: Is it really possible to survive winter with only a heat pump and no fossil fuel backup? See my post “Net Zero” to hear how my first year went (spoiler: I ended up producing 53% more electricity than I consumed!).

There were a couple of problems though. During a cold snap when nighttime temperatures plunged to minus 17 degrees, I’d wake up to windows with a rather thick rim of ice stuck tight to the bottom sash. If it was a sunny day and I kept up with a mop rag, it was gone by nightfall. If it was cloudy, the ice wouldn’t budge. I ran box fans, turned up the heat, and ran the Lunos at high speed but nothing worked absolutely. My current theory is that the concrete slab is still curing and the wood frame is still drying out. When humidity stablizes several years down the road, I should be fine. Some would argue that triple pane windows would be worth the extra money, just to ward off this one problem.

The other problem isn’t so much of a problem but a prediction that was born out. The bedrooms at each end of the house remained about 4-7 degrees cooler than the main room where the mini-split is located. Likewise in summer, the bedrooms are a bit warmer when I’m running the AC. I have several possible fixes for better air distribution, but so far the uneven temperatures haven’t been bothersome.

Overall, I’m pleased with how these unconventional mechanical solutions are working.

Posted on February 9, 2020 by amberwesterman